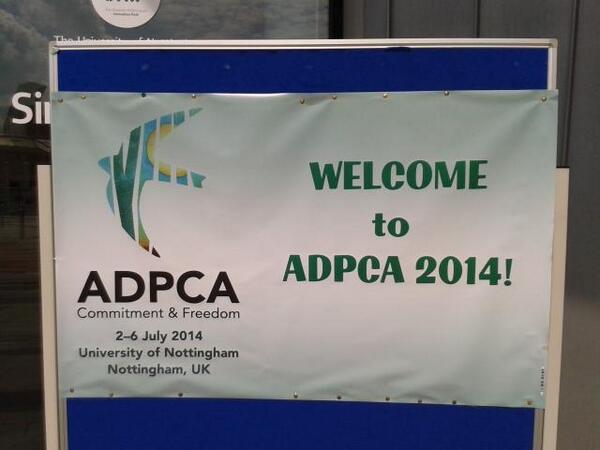 The conference this year is run by ‘community organisation’. That means that tomorrow is the first day, and might (MIGHT!) be when decisions are made about the rest of the conference. But they may decide not to do that. I personally won’t be doing any of that deciding as I only had a finite amount of money and annual leave and simply couldn’t afford to take half a day of leave (and pay for a full day of conference) to help decide on a plan of events that will mostly happen when I’m NOT there.

The pre-conference had Jerold Bozarth speaking this morning and a panel this afternoon. Bit of this morning were extremely interesting. I very much liked some of the things that Jerold had to say about Rogers and his (Jerold’s) own ways of working. I made several notes that were really relevant to me as a practitioner. The event was streamed by online events and (i think) will be permanently available online later. There were moments in both the morning and the afternoon where I felt the same spark that started me on this journey, the spark that perhaps my fellow trainee would call ‘spirituality’. Bits of it ‘made sense’ to me in a way that I couldn’t quantify. By the same token, bits of it were more of a disappointment – I thought that I was getting something more.. decisive. But I think that it wasn’t helped by accesibility issues. Jerold had problems hearing questions form the audience, and in the moment we didn’t manage to find a really successful way to address that. I think that it was just one of those things, and I’m not attaching any blame anywhere. I could see lots of people including the ‘organisers’ were frustrated though, and it was a shame. It didn’t take away from some of the great things that were said – it was just a shame that it couldn’t have been the more interactive event it was intended to be.

I got to speak to other trainees and meet other trained therapists, as well as saying hello to lovely people I met last year at BAPCA and a group of trainees sat and had lunch together before the panel discussion in the afternoon. I found that interesting to a large degree – it was useful to see different viewpoints from various ‘professional’ therapists and to hear their reassurance (for anyone reading who was listening – I asked the question about being a trainee) and I was really drawn in by some parts of the discussion.   I’m back on Thursday for the only other day I can go to, but looking forward to whatever events are happening that day, and no doubt next week’s blog will also be on a related theme 🙂

Say something about this Cancel reply